the Commercial, Industrial and Institutional Community since 1940

Staalsen Construction Company was founded by Henry Staalsen in 1940 as a general contractor specializing in concrete, masonry and carpentry.

Henry, a successful carpenter by trade, founded Staalsen as a means to pursue his life purpose; to freely serve the Lord while working and providing work for others.

In 1955, Henry Staalsen—aware of Charles McWherter’s like-minded life purpose, reputable work ethic, and tradesman skill—invited Chuck to join the company where they eventually became partners. Henry and his wife, Olga and their family “adopted” Chuck and Robbie and their family and extended families as their “own.” 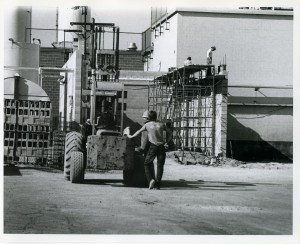 While growing the company, Henry and Chuck made “First Quality Always” their motto. From the materials to the job performance to the finishing touches, there were to be no short cuts. Hands-on service, determined performance, and expert craftsmanship became synonymous with the Staalsen name. Upon Henry’s retirement in 1981, Charles became President.

In 1980, Kenneth Klint, (Chuck’s son-in-law) came to work at Staalsen representing the third generation of family to be in the construction business. Upon graduation from Cedarville University in 2010, Ken’s son, Charles “Chucky,” joined Staalsen in the area of project management and finance. In 2016, Ken assumed the role of President, overseeing the day to day operations. Now, as President Emeritus, Charles McWherter serves in an advisory capacity both at Staalsen and at numerous local and international ministries.

Today, Kenneth Klint and Chuck Klint continue the Staalsen heritage: commitment to quality and integrity, dedication to our staff and clients, and the belief that the actions of this company reflect their heritage and faith in God.

Can we help with Your Project?